Source From HerePrefaceIn Linux, we use passwd to change password, but passwd requires input from stdin to get the new password. It is common case that we may want to change the password non-interactively, such as creating new user accounts and change or set password for these accounts on a number of Linux boxes when the new user creating can be done by one command line. With the help of pipe and a little tricky, we can change user’s password in one command line. This will save much time especially when creating a batch of user accounts.How-ToWe use one example to introduce how to change Linux user’s password in one command line. Suppose we login as root and want to change user linuxuser‘s password to linuxpassword.The passwd command asks for the new password twice. And these two inputs (the same password) is separated by one “Enter”. We can emulate this by the echo command with the -e option set. When -e is in effect, escaped characters will be interpreted. Hence, \n in echo’s input is echoed as “new line”. In addition, on modern Linux with sufficiently new passwd, you can use the --stdin option to let passwd accept a password from the STDIN instead of asking for the new password twice.So to change the password in our example, we just execute this one command:

on modern Linux. (Thanks to DAVID for this tip)or

Even further, we can create one user and set its initial password remotely by:

If you want to update your own password as a normal user, you may use

Security notesYou must be aware that the full command line can be viewed by all users in the Linux system and the password in the command line can be potentially leased. Only for cases where this is okay, you may consider using the method here.Alternative method using chpasswdchpasswd is a nice tool to change a batch of accounts’ passwords in one Linux box. It can be used to change a user’s password in one command line too. Check its manual for how to use it.
於 11月 29, 2019 沒有留言:

In Depth: Naive Bayes Classification
The previous four sections have given a general overview of the concepts of machine learning. In this section and the ones that follow, we will be taking a closer look at several specific algorithms for supervised and unsupervised learning, starting here with naive Bayes classification.
Naive Bayes models are a group of extremely fast and simple classification algorithms that are often suitable for very high-dimensional datasets. Because they are so fast and have so few tunable parameters, they end up being very useful as a quick-anddirty baseline for a classification problem. This section will focus on an intuitive explanation of how naive Bayes classifiers work, followed by a couple examples of them in action on some datasets.
Bayesian Classification
Naive Bayes classifiers are built on Bayesian classification methods. These rely on Bayes’s theorem, which is an equation describing the relationship of conditional probabilities of statistical quantities. In Bayesian classification, we’re interested in finding the probability of a label given some observed features, which we can write as P(L|features) . Bayes’s theorem tells us how to express this in terms of quantities we can compute more directly:

view plaincopy to clipboardprint?
Gaussian Naive Bayes
Perhaps the easiest naive Bayes classifier to understand is Gaussian naive Bayes. In this classifier, the assumption is that data from each label is drawn from a simple Gaussian distribution. Imagine that you have the following data (Figure 5-38): 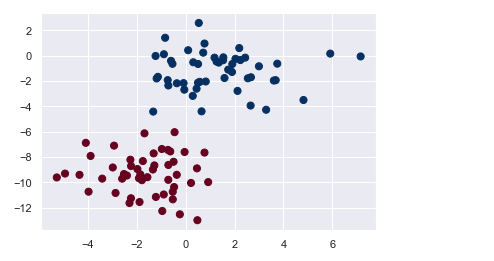 Figure 5-38. Data for Gaussian naive Bayes classification
One extremely fast way to create a simple model is to assume that the data is described by a Gaussian distribution with no covariance between dimensions. We can fit this model by simply finding the mean and standard deviation of the points within each label, which is all you need to define such a distribution. The result of this naive Gaussian assumption is shown in Figure 5-39. 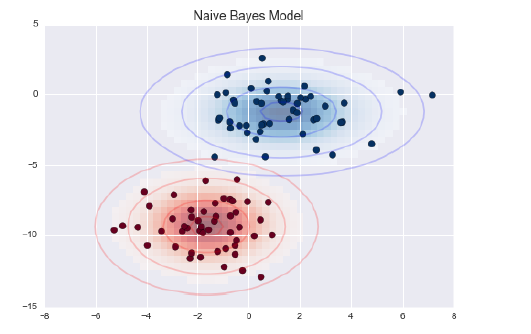 The ellipses here represent the Gaussian generative model for each label, with larger probability toward the center of the ellipses. With this generative model in place for each class, we have a simple recipe to compute the likelihood P(features | L1) for any data point, and thus we can quickly compute the posterior ratio and determine which label is the most probable for a given point.
This procedure is implemented in Scikit-Learn’s sklearn.naive_bayes.GaussianNB estimator:

view plaincopy to clipboardprint?
Now we can plot this new data to get an idea of where the decision boundary is (Figure 5-40): 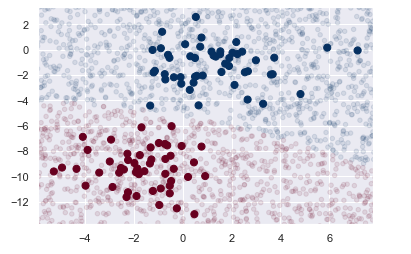 We see a slightly curved boundary in the classifications—in general, the boundary in Gaussian naive Bayes is quadratic. A nice piece of this Bayesian formalism is that it naturally allows for probabilistic classification, which we can compute using the predict_proba method:

view plaincopy to clipboardprint?
The columns give the posterior probabilities of the first and second label, respectively. If you are looking for estimates of uncertainty in your classification, Bayesian approaches like this can be a useful approach. Of course, the final classification will only be as good as the model assumptions that lead to it, which is why Gaussian naive Bayes often does not produce very good results. Still, in many cases—especially as the number of features becomes large—this assumption is not detrimental enough to prevent Gaussian naive Bayes from being a useful method.
Multinomial Naive Bayes
The Gaussian assumption just described is by no means the only simple assumption that could be used to specify the generative distribution for each label. Another useful example is multinomial naive Bayes, where the features are assumed to be generated from a simple multinomial distribution. The multinomial distribution describes the probability of observing counts among a number of categories, and thus multinomial naive Bayes is most appropriate for features that represent counts or count rates.
The idea is precisely the same as before, except that instead of modeling the data distribution with the best-fit Gaussian, we model the data distribution with a best-fit multinomial distribution.
Example: Classifying text
the features are related to word counts or frequencies within the documents to be classified. We discussed the extraction of such features from text in “Feature Engineering” on page 375; here we will use the sparse word count features from the 20 Newsgroups corpus to show how we might classify these short documents into categories.
Let’s download the data and take a look at the target names:

view plaincopy to clipboardprint?
For simplicity, we will select just a few of these categories, and download the training and testing set:

view plaincopy to clipboardprint?
Here is a representative entry from the data:

In order to use this data for machine learning, we need to be able to convert the content of each string into a vector of numbers. For this we will use the TF–IDF vectorizer (discussed in “Feature Engineering” on page 375), and create a pipeline that attaches it to a multinomial naive Bayes classifier:

view plaincopy to clipboardprint?
With this pipeline, we can apply the model to the training data, and predict labels for the test data: 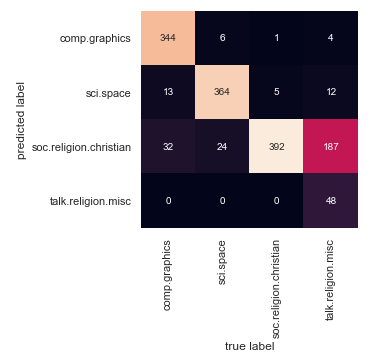 Evidently, even this very simple classifier can successfully separate space talk from computer talk, but it gets confused between talk about religion and talk about Christianity. This is perhaps an expected area of confusion! The very cool thing here is that we now have the tools to determine the category for any string, using the predict() method of this pipeline. Here’s a quick utility function that will return the prediction for a single string:

Remember that this is nothing more sophisticated than a simple probability model for the (weighted) frequency of each word in the string; nevertheless, the result is striking. Even a very naive algorithm, when used carefully and trained on a large set of high-dimensional data, can be surprisingly effective.
When to Use Naive Bayes
Because naive Bayesian classifiers make such stringent assumptions about data, they will generally not perform as well as a more complicated model. That said, they have several advantages:

These advantages mean a Naive Bayesian classifier is often a good choice as an initial baseline classification. If it performs suitably, then congratulations: you have a very fast, very interpretable classifier for your problem. If it does not perform well, then you can begin exploring more sophisticated models, with some baseline knowledge of how well they should perform.
Naive Bayes classifiers tend to perform especially well in one of the following situations:

The last two points seem distinct, but they actually are related: as the dimension of a dataset grows, it is much less likely for any two points to be found close together (after all, they must be close in every single dimension to be close overall). This means that clusters in high dimensions tend to be more separated, on average, than clusters in low dimensions, assuming the new dimensions actually add information. For this reason, simplistic classifiers like naive Bayes tend to work as well or better than more complicated classifiers as the dimensionality grows: once you have enough data, even a simple model can be very powerful.
於 11月 23, 2019 沒有留言: