[ 常見問題 ] How do I include jars in a groovy script?

Source From Here
Question
I have a groovy script that needs a library in a jar. How do I add that to the classpath? I want the script to be executable so I'm using #!/usr/bin/env groovy at the top of my script.

Also refer to "How do I auto load a database jar in Groovy without using the -cp switch?"

Source From Here
Preface
In my final post in the four part machine learning overview, I talk about the bias-variance tradeoff in machine learning and how it plays a role in models that overfit or underfit. Overfitting and Underfitting are both undesirable behaviors that must be countered. First I’ll introduce these topics in general, then I’ll explain how they come into play with logistic regression and random forests. 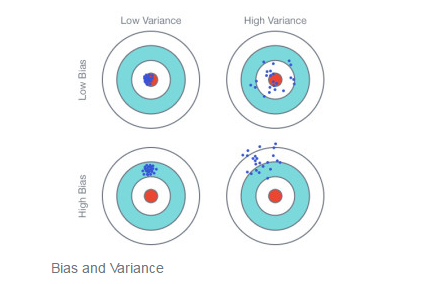 The low bias players’ darts tend to be centered around the center of the dart board, while the high bias players’ darts are centered in a different location. In this case, their darts are “biased” toward the top of the dart board; The high variance dart throwers have their darts more spread out; they are less able to successfully place the dart where they’re aiming (in the case of the biased player, they are aiming at the incorrect location).

When talking about bias and variance in machine learning, we are actually talking about the bias and variance of a type of model. For example, say the bulls-eye represents the “perfect model,” the one that perfectly represents all data that could possibly be generated by the process we are modeling. In reality, we will only have a subset of possible data (our training set), so we will only be able to build an approximate model (a single model corresponds to a single throw of a dart). Also, we do not know what type of model to build (logistic regression, random forest, or another type).

We see that, if either bias or variance is high, a single model (dart throw) can be very far off. In general, there is a tradeoff between bias and variance, so that model types with high bias can achieve lower variance, and models that have low bias will be at the expense of higher variance.

Overfitting and underfitting
Both high bias and high variance are negative properties for types of models. When we have a model with high bias, we say it “underfits” the data, and if we have a model with high variance and low bias, we say it “overfits” the data. We’ll see why in this section. Lets say we have a set of n data pairs (x1, y1), (x2, y2), …. (xn, yn). Our goal is to choose a function that represents the value of y given x. So, we want to find a function f(x) that closely “fits” the data (we want the error | f(xi) – yi | to be small for every training example pair (xi, yi)). This type of learning problem is called regression.

Assume we want to represent f(x) as a polynomial of a certain degree. If we choose degree d, then we have a family of possible models to choose from, represented by the equation below. a_i’s are the coefficients of the different terms.

The rightmost fits the data perfectly, so it is not biased. In fact, any polynomial of degree at least n-1 can fit a dataset of size n (provided yi = yj if xi = xj). However, when we look at the right line, the behavior of the polynomial is erratic, and has behavior at the very left end that seems different from the general pattern in the data. It has worked too hard to fit every single point, and has “overfit” the data. When we have to make a prediction in the future, it is unlikely that our function will give an accurate prediction, especially if x < 1.

If we were to move a single data point very slightly, the change in the right curve would need to be dramatic in order to still fit all the points. Therefore, this type model has low bias but high variance. On the other hand, a one dimensional polynomial (the leftmost) has high bias, since the model is less flexible. No matter how dramatic the dataset “curves,” we will only be able to draw a straight line. It “underfits” the data. However, if we slightly move one of the data points, there will be very little change in the line that we have drawn. Therefore, the high bias linear model has low variance.

In this case, the center line represents a pretty good fit, that does not obviously over- or underfit the data.

Overfitting is usually a more major problem in machine learning than underfitting. It is often the case that there is noise (small, random errors) in the data. Overfitting the data causes the model to fit the noise, rather than the actual underlying behavior. Models with less variance will be more robust (fit a better model) in the presence of noisy data.

For sales data, noisy data could result from incorrectly filled-out data fields within Salesforce. At Fliptop, we have to make sure our machine learning algorithms are robust to any errors that your SDRs may have made when inputting data on the lead record!

So, how do we know when we are overfitting the data?
The more complex the type of model we choose, the less error there will be on the training set. As we saw in the above regression example, if we choose a complex enough function, the error will go to zero. There are several methods to reduce overfitting, including the bootstrap aggregation technique (explained in the previous post about random forests). One of the simplest and most effective techniques to detect overfitting is to perform cross validation.

So instead of just looking at training error, we now look at both training AND validation error (also called generalization error). We can tell from these two error values if a model is overfitting or underfitting.


The below figure shows the relationship between model complexity and training and validation errors. The optimal model has the lowest generalization error, and is marked by a dashed line. 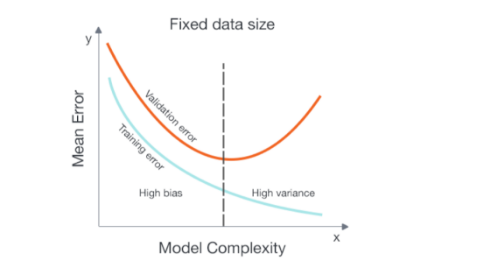 Another good practice is to repeat the same analysis with several random training/validation splits, to see the variance in the training and validation errors. This helps ensure we didn’t just get lucky with an overfitting model.

Logistic regression
Logistic regression has high bias and low variance. It is analogous to the one degree polynomial above in the regression example. Instead of representing the data points as a line, it tries to draw a separating line between two classes. Its decision boundary is always linear. Another way to think of this is, when logistic regression identifies a particular feature as positive, then a higher value for that feature will always yield a higher predicted probability, with all other features held constant.

Even though logistic regression has high bias and can underfit the data, this does not mean that logistic regression cannot overfit the data. In fact, overfitting can be a serious problem with logistic regression. For example, say that in your CRM database, all leads that converted were from California. Then the learning algorithm could identify location = California as a strongly positive signal, so positive that it overwhelms all other features, and becomes like a decision tree that predicts conversion if and only if location = California. Our model will have very good training and validation errors, but just because of an irregularity in our training set.

Decision trees
Decision trees in general have low bias and high variance. We can think about it like this: given a training set, we can keep asking questions until we are able to distinguish between ALL examples in the data set. We could keep asking questions until there is only a single example in each leaf. Since this allows us to correctly classify all elements in the training set, the tree is unbiased. However, there are many possible trees that could distinguish between all elements, which means higher variance. Therefore, in order to reduce the variance of a single error tree, we usually place a restriction on the number of questions asked in a tree. This is true both for single decision trees and ensemble models of decision trees (like random forests).

Random Forests
As mentioned in the previous post on random forests, the randomization used to build decision trees within the forest help combat overfitting. These types of randomization are:

In the image below, we see the validation error plotted as a function of the number of trees for three types of ensemble methods using decision trees. In each case, adding more trees improves the validation error. The yellow line corresponds to using bootstrap aggregation alone (a.k.a. “bagging”), the blue line is a random forest, and the green line is gradient boosting, a more advanced ensemble technique. Of these, we use random forest and gradient boosting to build models at Fliptop. 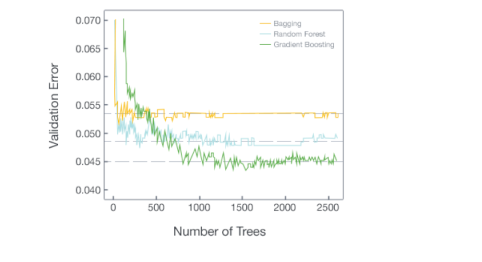 In our third post on the four part series on how machine learning works I’m going to explain two types of models that we use for our customers; decision trees and random forests. Random forests are more advanced learning models that are capable of creating more complex decision boundaries than logistic regression (covered in our last post). The “forest” part of the name means that it is made up of multiple decision trees. I will explain decision trees first, then talk about random forest

[Linux 常見問題] Bash - How do I parse command line arguments in bash?

Source From Here Question Say, I have a script that gets called with this line:

What's the accepted way of parsing this such that in each case (or some combination of the two) $v, $f, and $d will all be set to true and $outFile will be equal to /fizz/someOtherFile ? How-To Preferred Method: Using straight bash without getopt[s] I originally answered the question as the OP asked. This Q/A is getting a lot of attention, so I should also offer the non-magic way to do this. I'm going to expand upon guneysus's answer to fix the nasty sed and include Tobias Kienzler's suggestion. Two of the most common ways to pass key value pair arguments are: Straight Bash Space Separated - myscript.sh

Using getopt[s] from: http://mywiki.wooledge.org/BashFAQ/035#getopts Never use getopt(1). getopt cannot handle empty arguments strings, or arguments with embedded whitespace. Please forget that it ever existed. The POSIX shell (and others) offer getopts which is safe to use instead. Here is a simplistic getopts example: - myscript3.sh

The advantages of getopts are:


1. It's portable, and will work in e.g. dash.
2. It can handle things like -vf filename in the expected Unix way, automatically.

The disadvantage of getopts is that it can only handle short options (-h, not --help) without trickery. There is a getopts tutorial which explains what all of the syntax and variables mean. In bash, there is also help getopts, which might be informative.
於 9月 25, 2016 沒有留言: